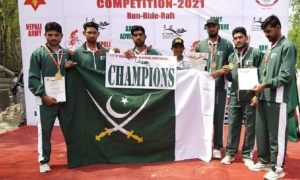 According to a statement from the Inter-Services Public Relations (ISPR), the Pakistani military participated in the International Tri-Adventure Competition for the first time.

According to the statement, the competition ran from March 18 to March 21, 2021, while its purpose was to test the physical stamina and mental agility of the participants.

Some of the activities included cross-country racing, cycling, and rafting. This was the first time that the Pakistani army participated in the event

According to the statement, a total of 20 teams participated in the competition. The Pakistani army team won the gold medal in the international category

The teams are subjected to high intensity activities including 6.7km of running, 26km of cycling and 11km of rafting.

Reach out to us to learn more at URBANARTS !

Branding And Marketing In Pakistan

Mobile Application Development In Pakistan  In the twenty-first century, the digital mobile app era the market for the creation of mobile applications is rapidly expanding. As a consequence, numerous app developers and app creators are stepping out to showcase their amazing ideas, which are very commendable. From car booking to food delivery, from online business to online shopping, anything can now be done with the assistance of an app. In 2021, app stores and in-app…